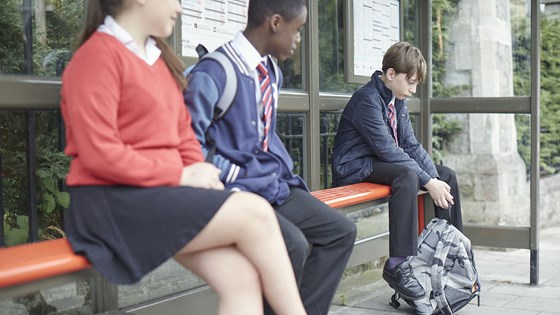 Are we acting quickly enough in 2019 to tackle this growing problem?

Pupils thought to have come from Bradford’s Ofsted award winning Carlton Bolling College were captured on CCTV surrounding nine-year-old Kalin Shah yards from his home. The January 10th incident is now being dealt with more than three weeks down the line.

They show the pupil from nearby Delius Special Needs school coming up the lane close to the house pursued by a group of six boys clearly antagonising the youngster. As he stands against the school fence, one makes an aggressive run towards him. Kalin’s mother then appears – he runs toward her as the boys

stand shouting abuse. They appear back on camera coming back down the lane one individual looking toward the house. As Kalin’s mother appears once more, a boy makes hostile gestures before they all run back down the lane.

In yet another case of bullying in West Yorkshire, the family, who live across the road to the state funded senior school for boys and girls, were left both angry and feeling badly let down.

On confronting the school, Kalin’s dad Shaheen explained: “My son has autism and is vulnerable, so to see him suffer in this way is terrible. I was asked to make an appointment, but demanded I speak to someone there and then. I was told ‘they couldn’t have been our students and I should report it to the police’. In other words they didn’t deal with the problem until they were given proof.”

Shaheen subsequently submitted a written complaint against Ms Jane Girt, Deputy head at Carlton Bolling College, saying: “I felt she ignored me and only instructed me to report to the police, so she would not have to deal with the matter. As advised, I did report the matter. Similarly, to me the police officer was also shocked at how Carlton Bolling responded or rather by the lack of response.”

He added: “As if that wasn’t upsetting enough for us as a family, Ms Girt showed no interest what so ever in trying to get to the bottom of this. To think Ms Girt occupies a senior role within the school, one would think she would follow up such a serious matter raised by a family living within yards of Carlton Bolling college.”

According to the most recent Annual Bullying Survey, conducted in partnership with secondary schools and colleges across the United Kingdom, a staggering 54 per cent of young people in the UK have suffered bullying at some point. Sadly, many cases aren’t dealt with until they are highlighted on social media.

Mr Shah eventually met with the Head at Carlton Bolling on the 31st of January, and though very apologetic was told ‘he’d known nothing of the incident until much later, and it should have been dealt with much better at the beginning’. Next day the school informed Mr Shah all six boys had been reprimanded after their parents had been asked to come in, with the ringleader expelled from school for a couple of days.

Shaheen added: “Naturally I’m appreciative but feel really unhappy the Deputy Head teacher at Carlton Bolling didn’t help and showed no compassion. Why is it no-one takes any notice until everything is either caught on camera or put online? Strict guidelines are of no use when poorly applied. You’d have thought recent bullying incidents here would keep people on their toes.”

Asian Sunday contacted Carlton Bolling College to ask if they’d let the family down in the way they’d initially dealt with the incident. No comment has been received. Kalin and his family clearly feel aggrieved over how they were treat initially. Guidelines on the school’s website show no reference to bullying incidents involving pupils outside the premises.

In October of last year many people were left horrified at the bullying of a Syrian refugee on playing fields at the Almondbury Community School in Huddersfield. The victim who already had a broken wrist was grabbed by the throat before being pushed to the ground with water then poured on his face. It prompted a national outcry only because it had been filmed and passed on to the national media.

Heroic MP Tobias Ellwood shared the footage, writing online: “Absolute disgrace. This bully, his parents, the school where this occurs and the onlookers who fail to step in, all have big questions to answer.”

When asked if we were letting young victims of bullying down a Department for Education spokesperson told me: “Harassment or bullying of any kind is completely unacceptable and abhorrent in any setting, including schools.

“Schools have a role in promoting community cohesion and integration and are required to support pupils’ spiritual, moral, social and cultural development. Promoting our shared values, including mutual respect and tolerance of those with different faiths and beliefs, is a priority for DfE. We are working with the sector to support them in this role, including for example, encouraging social mixing across schools.”

The DfE Confirmed To Asian Sunday:

There is no place for any form of hatred, discrimination or racism in society.

All schools must promote the fundamental British values of democracy, the rule of law, individual liberty, and mutual respect and tolerance of those with different faiths and beliefs and they are required by law to have measures in place to prevent bullying – including racist bullying.

All schools are legally required to have a behaviour policy with measures to prevent all forms of bullying. They have the freedom to develop their own anti-bullying strategies appropriate to their environment and are held to account by Ofsted.

Under the Equality Act, schools are required to foster good relations of people of all backgrounds and eliminate discrimination

Under Section 90 of the Education and Inspections Act 2006 teachers have the power to discipline pupils for poor behaviour which takes place outside of the school gates. The school behaviour policy should set out what action the school will take in response to non-criminal misbehaviour that occurs off the school premises.

Teachers can discipline pupils for misbehaviour when they are participating in any school related activity, on the journey to and from school, or when wearing school uniform. Teachers can also discipline pupils for poor behaviour outside of school that could have repercussions for the orderly running of the school, or poses a threat to other pupils or the public, or could adversely affect the reputation of the school.

Discrimination in the UK is worse than five years ago

VOLUNTEERS WEEK: Meet the Covid heroes making a difference in their communities

Kids eat for free in Morrisons cafe this summer